Football is a religion holding such fascination over football aficionados that when David Beckham, a famed striker, got a tattoo of Jesus, the response from football fans was ‘That’s huge for Jesus’. People either know FIFA as the Féderation International de Football Association, Earth’s most grotesquely crooked organization, or that game they used to play. We meant the game, though. FIFA, Electronic Arts (EA) most successful sports video game franchise in history and the world’s most popular sports game, has long blurred the boundaries between real sports and their pixelated counterparts. With 150 million copies sold worldwide, FIFA is easily among the best-selling video games, period, and sports games are EA’s bailiwick, and no mistake.

Technically, FIFA has been an electronic sport or eSports since 2001 and from the get-go tournaments have abounded. The now defunct World Cyber Games (WCG) powwow organized the world’s first FIFA tournament in 2001, offering particularly rich prize money estimated at $35,000, was the first event to promote FIFA as eSports.

Thanks to the surging popularity of the video game industry, eSports betting, and FIFA betting in particular, have drawn in sizeable crowds of devotees. In fact, so overwhelming is the popularity of eSports today, the notion that they may outpace their physical counterparts is far from madcap. By some measures, they have. 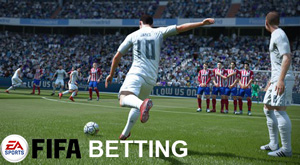 In the following lines, we will try to trick out the online stadium where football, both physical and digital, unfolds:

FIFA betting: An overview of a market unknown

The prominence and staying power of eSports are undeniable. They spur industries projected to generate billions of dollars over the next several years. This is a two-pronged trend – with viewership shooting up on Twitch.tv and money transactions carried out, eSports are all the more awe-inspiring. In 2016 alone, sportsbooks handled $649 in betting proceedings. Small wonder then that the world’s largest betting companies are readily embracing an industry that is likely to outgrow eSports.

FIFA betting in particular is an interesting amalgamation of controversies. A touchy subject in real life, gambling may be more readily at home within the confines of a video game. But as professional gamers continue to battle for juicy cash prizes in front of rapt audiences, so is eSports and eSports betting slated to break away from its infancy and become an unstoppable juggernaut of cash proceedings.

There are two key takeaways to note here:

Cash prizes have been flying around at such largesse that sportsbooks would have been remiss not to pile on.

As eSports betting is still in its infancy, there are pitfalls and benefits to seeking out venues playfully called The Last Chance Saloon. Luckily, for keen bettors, a solution has existed for a while now. Bet365 is the world’s premier betting venue which offers a strong eSports section, and it has offered FIFA betting quite generously.

Bet365
What makes Bet365 a particularly fetching option is the websites overall functionality and efficiency. Apart from nifty mobile solutions for the bustling bettors on the go, the website also offers a live customer support around the clock and proceedings are handled swiftly.

Putting Bet365 in context with FIFA betting yields no drawbacks and we encourage you to head out and see for yourself.

Betway eSports
Betway is by any measure an eSports books just as reliable and efficient as Bet365. The bookie odds are tantalizing and its welcome bonus is a byword for generosity. Add Betway’s vowed interest in electronic sports along with the outstanding mobile solutions, and the website is a not-to-miss betting venue for novices and professionals alike.

For there to be even a semblance of FIFA betting online, accompanying events must abound. So, dissecting the landscape of competitive FIFA could help us garner better understanding of how eSports as a whole and betting work. As a quick overview, FIFA tournaments started relatively big, with WCG laying down $30,000 in ready cash for aspiring digital footballers to battle for. Later on, prizes continued to fluctuated, but a fair estimate suggests that overall, prize money has been anywhere between $100.000 and $250,000. Shockingly, prize money for FIFA 2017 alone have reached over $1m. In the following lines, we examine FIFA eSports tournaments past and present:

FIFA World Interactive World Cup 2017
The brainchild of EA has been around since 2004, when the company first introduced the event. The latest iteration of the pow-wow has been generous and awarded $200,000 to the winner.

Tournaments of large scale easily translate into more betting opportunities, which are not sneezed at by sportsbooks and punters alike.

Not in the case of FIFA, though. FIFA resurgent popularity has overcome the boundaries of the physical world, and the computer game iteration has found new hunting grounds. The game is available for multiple devices, including PC, PlayStation, Xbox, and Mobile, and such versatility leaves, needless to say, ample room for betting.

ESL PC leagues have been generating huge interest on the part of experienced and less-calibrated players alike, and the league’s ubiquity has turned it into a good incubator for FIFA betting.

Ultimate Team™ Championship Series 2017
Speaking of consoles and versatility, it is difficult to miss the fact that there are now substantial tournaments for the Xbox and PlayStation versions of the game. The UT Championships Series 2017 offered a total prize pool of $400,000.

One look at the event here would be revealing enough. The match, projected on the big screen, easily bears the trappings of real football and the atmosphere is no less charging. Speaking from the standpoint of gamers, it is a joy in its own right to see fans milling about the round pedestal in the middle of sold-out gaming arenas in a Top Gearesque style with ongoing commentary that smacks of the real thing, but somewhat minus the human contact, which sort of makes it better. We jest of course, but witnessing enthusing crowds cheering at video games has a rather revitalizing effect on sore eyes.

Montpellier Esport Show 2017
The French digital festival has been a proponent of eSports altogether. The 2017 iteration saw FIFA featured as an eSports title and allowed for some concomitant FIFA betting on the way.

And it would not really be FIFA if there were not some French action involved. The event featured a modest cash prize of $10,000.

World Cyber Games (2001)
It was the first official FIFA tournament that offered $30,000 in ready cash. The event established the idea about eSports as a phenomenon with real world implications. Back in the day electronic sports were a burgeoning trend. They did not really strike a chord with a vast cohort of adults, but the World Cyber Games made sure they were a credit to their name.

‘World’ rung loud and local qualifiers teemed in a number of European countries, including Eastern European ones where no significant electronic sports have been taking place. The tentative rise of FIFA and MOBA games, paired with the steady march of titles such as Warcraft III and StarCraft sow the origins of gaming in Europe. With mounting cash prizes, gaming could no longer be blamed for the ills of the world, up to a point at least. The rise of eSports has not disappointed and the fledgling betting industry has shaped up as its unshakeable companion.

Betting on FIFA and plumping for FIFA eSports teams is all part of the order. Understanding the inner workings of betting is no easy task. But there is more than meets the eye where FIFA betting is involved. Let us consider why people wager on the outcome of a video games:

With FIFA increasingly resembling real football (think of the fact that real clubs are actually investing unstintingly in their virtual alter egos, and top footballer’s self-confessed sins of playing FIFA in their spare time for hours on end), it is a striking phenomenon that FIFA betting may have more to do with fans actually vouching support for their local digital team. A skit that watching eSports being played at the highest level would equate to watching another person eat their dinner, recently made by a host, is grossly wide of the mark. We, gamers, like our grub and would not dare miss a nourishing meal.

Let us explore the arguably more interesting aspect of FIFA betting, that where money change hands, palms are greased and pockets lined. There are inherent strategies to follow when deciding how to place bets. As it has been pointed out previously, Bet365 and Betway should be your starting points. Moving forth, punters should rely not only on the auspicious odds offered by the world’s premier bookies, but also on their overall understanding of the game.

We are far from the idea of putting the onus entirely on you, but still, our team has a few recommendations to dispense with so that you may obtain a better understanding of how the intricate cobweb of FIFA betting works.

We also advise you to gamble smartly. Work smart not hard, a popular adage has it. To this end, make the most of sportsbooks and jungle adroitly between bookies. Do not rely too heavily on one betting company exclusively. The key to any successful gambling, including FIFA betting, is to hedge against risk and take calculated decisions. On the other hand, if you are doing it out purely to add a little more oomph to spectating pixelated football derbies, then there is no shame in that and we welcome you in your decision.

FIFA eSports: This is not the end

The future of eSports and its offspring – eSports betting, is certainly not bleak, albeit fraught with challenges. FIFA betting can be a litmus test for a future where eSports betting is readily accepted or at least regulated, and takes on a grander scale. Whatever the future may hold, the distinction between sports and their electronic brethren is getting increasingly difficult to tell.