Blizzard has certainly not pioneered card games or the trending genre of multiplayer online battle arena (MOBA), but the company has managed to establish itself in a market so-long dominated by other forces that its chance arrival has unruffled a few feathers.

Hearthstone is the company’s latest flagship installment and an essential cogwheel in the brave new world of electronics sports (eSports) where Blizzard is trying to plant its banner. All faction differences aside, we do not think that Blizzard will stand for much competition. That is why the belated travelers decided to just do what they did best – establish themselves as market leaders and not-so-subtly send rivals plummeting into tailspin. 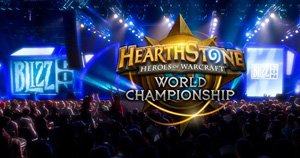 This being Blizzard and the United States, the legality of Hearthstone betting is a contentious point. In the following low-down of the betting industry and Hearthstone’s participation in it, we will broach several topics which, in any event, are complimentary.

So, what have we prepared for you in this overview? Behold!

Hearthstone betting on the eSports plain of existence

Blizzard has been a tad coy about releasing official data when it comes to its products, unless the numbers are so stonkingly overwhelming that the O-shaped rictus long dominates the faces of the fandom. Still, Hearthstone is known to rake in estimated $20m a month, which leaves a lot of leeway for associated betting activity, which Blizzard in general takes a dim view of.

But all legality bickering aside, Hearthstone’s competitive scene has exploded and sportsbooks have been quick to introduce the game to their daily odds crunching and forecasts preparations.

Renowned bookmakers such as Betway Esports and Bet365 have forged ahead and joined the cohort of bookies offering odds on the outcome of tournaments and brawls at the local tavern. Not to put too fine a point on this, but local cafés often turn into taverns where much rumpus between rival teams and some accompanying rump-kicking have originated.

And while Blizzard shies away from sanctioning any betting on Hearthstones, fans have piled on and seized the gambling frenzy. ‘Carpe dineros,’ are the rumored battlecries of this strange lot.

At a quick glance, there is a lot betting on tournaments, both wilted and burgeoning, going on. Consider the following:

Prior to going into more detail into the schedule of Hearthstone esports events, we will discuss the types of bets available to chance-takers.

Tournament bets
Tournament betting are classic rags-to-riches story. Punters are offered pretty good odds of making a mint, however there is no way of knowing whether a particular contestant is going to make it to the finals. Incidentally, betting on who is going to rough it through to the end is another type of Hearthstone betting which may prove lucrative. In other words, the earlier you bet on the outcome of an entire tournament, the more generous the profit. Nevertheless, do consider that the competitive scene is a fickle mistress and it changes constantly, with titans tumbling down from the skies and newly-fledged zealots shooting to glory. An upshot of betting on whole tournaments is that, on the off chance punters prove right, they are slated to make big money.

Naturally, betting on single matches is also possible. Bear in mind that most competition feature events that are BO5 format, or best of five. In order for a team or contestant to be announced victorious, they need to clinch three wins.

First damage
Playstyles vary from team to team. Some tend to be aggressive and poke their enemies more often, whereas others prefer to hunker down and prepare themselves for the long haul.

The damage bet consists of trying to tell which team will go all in and try to harm the opposing team first. Certainly, those types of Hearthstone bets are just a way to liven up traditional betting, but they could prove particularly alluring to players who proud themselves on having some deeper, and exclusive understanding of the game.

As is the case with any type of betting some understanding the current ‘meta’ and background information about teams could prove nifty. As to the ‘meta’, if bettors are not devoted followers of live streams and current developments in the Hearthstone competitive scene, we recommend them to at least try to follow some of the esports media outlets dedicated to the game.

Handicap bets
Handicap comes in all shapes and forms. It is the type of betting where punters choose to side for what most commonly is perceived as the weaker team. In addition, the favorite team may start with a few games back, meaning that in such bets, the winners are counted as already having lost one or two games in a BO5.

Turn bets
Unlike other sports titles, Hearthstone turn betting entails guessing how many turns a game would take to finish. Punters may use this type of wagering to introduce variety to their bets or if they are inclined to believe that a certain contender would manage to clinch a victory within a specific number of turns. Again, statistics may be helpful here. However, the average turns it takes to complete a game may vary greatly from one contender to another, from one game mode to another.

The only statistics we managed to dig up were about experience per hour values of the different game modes.

Lengths of games by game mode (in seconds)

If you like numbers and statistics, you can then browse at your leisure through GosuGamers sterling website offering various projections and tracking of current top dogs: 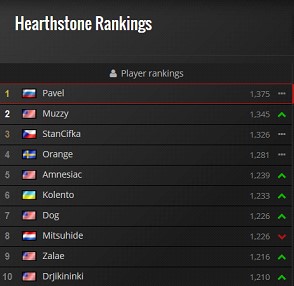 Special bets
Special ts are there to enliven the betting process as a whole. They are spontaneous and difficult to predict. But they also pique the fancy of gamblers of all stripes as Hearthstone betting is both intimate knowledge of the game itself as well as some familiarity with statistics.

As bookies line up to offer new and exciting betting options, such as which and if a certain card is going to show up in a match up, punters are pulling their weight to benefit the most from such occurrences.

Naturally, special bets, more so than others, are volatile and mutable. A fair warning goes to all gamblers who cross the great beyond of Hearthstone betting.

We think you have an appointment, Hearthstone eSports events and schedules

What then spurs the betting industry surrounding Hearthstone and eSports as a whole? The answer is not that difficult to divine – moolah. Well-heeled investors splurging benevolently in the pursuit of personal gain under the veneer of drab sentimentalism.

Avaricious investors are not necessarily a force for evil. They provide the means that keep many aspiring professionals going. And for all their alleged moral fallacies, eSports buffs as the organizers of DreamHack are actually pillars of the local community. So, let’s take a careful look at what tournaments there are, starting from back to front.

Innkeeper’s Invitational
Fans enthuse about taverns. Blizzard’s new tavern-brawl-style of games are the hot new thing. In picking the name for its first official harbinger of an eSports future for its game, Blizzard chose a title that resonated with the audience. The Innkeeper invites all players of merit to its humble adobe where the apt gamers could battle it out.

The event was hosted in 2013 as a precursor to today’s Hearthstone World Championship, which succeeded it in style and expanded the boundaries significantly.

DreamHack
The stuff of Dreams! One of the most respected tournaments worldwide and perhaps the only digital expo in existence parents, if they are not gamers themselves, don’t look at with a suspicious eye. DreamHack is praised by gamers and noobs alike. In February, DreamHack announced some significant changes for its Hearthstone derby in the United States, expanding the venues where the Grand Prix will unfold. The tournament is also of the more generous out there with a total prize pool for 2017 estimated at $25,000. An overview of the schedule for 2017 would look anything like:

This variety of gaming events allows for a lot of Hearthstone betting. However, wagering on the game raises some serious legal concerns in the eyes of Blizzard who have been known to act on all sorts transgressions surrounding their games and meting out punishment rather too readily. At the same time, Blizzard may well be right to try and preserve the integrity of their game laden with enough microtransactions to cause a major headache to even an established game industry behemoth.

However, Blizzard ought to be cognizant of the fact that as eSports expand, eSports betting website will teem and betting will continue at full speed. Let us look at some of the erstwhile scraps Blizzard has had with malefactors who flaunted the unwritten and written laws of the company.

Hearthstone gambling and the comeuppance

So, Blizzard do not like it when people take law into their own hands. Vigilantes be ware, Blizzard is putting the crackdown on you. Most recently, the Internet’s most nondescript slice of bread, Disguised Toast, was handed a four-day ban after reproducing a bug on his stream for hundreds of people to see. Things got rather toasted. But still, Mr Toast did what every self-respecting bread would have done in his place: he reported the bug.

Chinese Hearthstone team league
The commotion surrounding the brief hiatus of the Chinese Hearthstone team league left some questions unanswered, most notably: Just what exactly is going on? Team Story was allegedly facilitating some sort of gambling, as a video of the tournament revealed that teams were betting amount of chips prior to each match. After the gambling element had been taken out, the league returned.

Meanwhile, the UK Gambling Commission published a report in 2016 alleging that Hearthstone could be gambling. Nothing much has stemmed from the report, but for a moment, it looked like dark clouds were gathering on the house of Hearthstone.

The current storm involves Blizzard which has suggested that it would not stand for sponsorships for professionals that is rooted in sportsbooks. Any association between a provider of services for betting on electronic sports which is currently funding a team that shows up at a Blizzard’s event, may lead to an unpleasant turn of events for said professionals. However, some of the top-ranking teams, such as Fnatic, are currently receiving funding from a famous sportsbook and Blizzard has not acted on the rule for the Hearthstone Championship Tour. No daggers have been drawn, but things seem fraught.

The sum total of Hearthstone gambling

There are pitfalls ahead on the road of Hearthstone gambling. While Blizzard is determined to make its games leaders in their respective fields and promoting eSports in the process, the company is loath to encourage any money transactions that originate from third-party services. Nevertheless, eSports is here to stay, and as Blizzard continues to raise the profile of its new-age competitive online titles, so are bookies and bettors slated to earn handsome amounts.