Heroes of the Storm: The Hotsest Esports 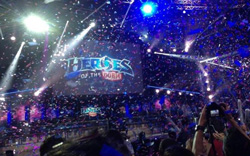 Let there be light… a lot of slicing, brandishing of swords, releasing of strange particles in the atmosphere, reading from ancient scripture that produces much befuddlement on the faces of foes who do not quite get you, but are tentatively checking if all their bits are still attached, after the incantation of some dreadful spell has come to a premature and somewhat panting end. Enter Heroes of the Storms (HotS), the latest foray of Blizzard Entertainment into electronic sports or eSports. A title that draws from the entirety of the StarCraft and WarCraft lore and decidedly takes on corpulent established rivals the likes of League of Legends (LoL) and Defense of the Ancients (DOTA) 2. HotS is the hots new thing on the eSports and online betting scene, if you will excuse our corny turn of phrase.

The game is clearly spoiling for a fight with the shuffling giants of the MOBA genre, DOTA 2 and LoL and the vigor with which HotS has risen on the competitive scene must well have caught the eye, or perforated the eardrums of some of the world’s best-established sportsbooks offering eSports betting.

Behold, for HotS is embraced by Betway, bet365 and a handful of others that are open for business, and business is booming.

The pillars of online betting are certainly sportsbooks who facilitate such activities. HotS is featured on every sportsbook you can wit of. This is not incidental. Blizzard has decided not only to desist from scaling back support for the game, but punch it up.

In a ‘Beyond the Summit’ interview, eSports Product Manager Sam Braithwaite discussed that the game will see plenty of new content (doubling the existing pool of heroes), and the introduction of a new Open Division for the riff-raffs. Far from sounding deprecatory, this change would allow for a lot of HotS betting. A kind reminder of the still more positive winds of changes at the game’s back as Blizzard has committed $3.2m in prize pool throughout 2017. Heroes of the Storm events are mushrooming all over the place with the latest edition of the Heroes of the Dorm dropping from ESPN and seeking wider audience online on Facebook. An event that serves as a neat little reminder how much stream services have come to rival traditional media in terms of subscription and advertising revenues.

All of this provides ample context for HotS betting. In the following low-down of the HotS betting scene we will look at several intrinsic characteristics of this phenomenon, namely:

Heroes of the Storms tournaments are gaining traction. Viewership on Twitch.tv is modest, but rising. With a unanimous endorsement from sportsbook, HotS betting is a thing. Let us plunge into the vast jungle of readily available odds bookies have considered worth offering:

A point well worth making here is that sportsbooks allow punters to place all sorts of bets on the same matches. Meaning, you can easily root that a team would be the tournament’s winner, but that it would clinch multiple victories along the way. It is a fair and a valid bet. So, when people say that the house always win, perhaps they have failed to account for this stratagem which allows the savvy punter to whiplash not only the house, but the whole neighborhood.

Special odds are teeming with unprobed possibilities and as such they slap the game with some extra excitement.

We have talked extensively about some of the bookies which offer great HotS odds here. Bet365 and Betway are two of the world’s powerhouses of esports gambling. As we have talked before about the operators, both offer particularly handsome bonuses to anyone who wants to plunge into the shadowy world of online gambling.

Betting on eSports HotS is no easy undertaking. But before outlining some basic strategies to follow when placing one’s bets we will answer what makes some games raise in terms of popularity and prove fortuitous hunting grounds for bettors.

HotS tournaments and their rice to prominence

Tournaments and the revenues they bring to organizers, aspiring and actual media outlets, and not least to players and spectators are a force major in the betting world of HotS. Whopping sums get the motley throngs agog with excitement at the juicy prospects ahead. It is not entirely true that all betting is carried out on the basis of cold number-crunching. In fact, the excitement tournaments create through fanfare and all the glitzy and spruced venues is enough to drive bettors from purely sentimental reasons. Blizzard actually allowed fans to ‘Cheer’ for their favorite players on Twitch.tv by depositing small amounts of money. Today, the tournaments with the most clout are as follow:

Heroes of the Storm World Championships
Speaking about HotS tournaments we could hardly pass up on the Heroes of the Storm World Championships which culminate at BlizzCon. As with any other product, Blizard has made sure to run its own gig and whip up support and excitement about its games. With prize pools starting at $500,000 and soaring well beyond $1m, BlizzCon is a titillating option for gamers and bettors alike. As the main propagator of eSports HotS betting, Blizzard continues to bolster its efforts to claw market share of the shuffling behemoths of the MOBA genre LoL and Dota 2.

DreamHack
DreamHack is a curious amalgamation of all that is good and allegedly bet about gaming. Bear with us. Video games have often been blamed for the ills of the world, but iin2017 the founders of DreamHack were distinguished from the municipality of Jönköping, Sweden for their contributions ’to business, education and society of the local community.’

Let us couch DreamHack in more gameresque terms now. As one of the world’s largest digital festival, the event is a Mecca to gamers and youths with a technological turn of mind. The HotS tournament staged there this year fetched $500,000 in prize money to participating teams.

Small wonder then that it should draw such interest on all sides.

Heroes of the League Super Season 2016
The third season of the event unfolded in South Korea and offered the not-to-be-sneezed-at $166,000 in prize money. South Korea has long been a place where competitive video gaming has been televised and interest in any new title, and some more outlandish and less know, has helped propel said game to the summits of mount eSports.

With a handful of events on the line, HotS betting is, not surprisingly, in full spate. Investors are pricking up ears, bookies continues to come up with a variety of odds, spectators and aficionados as well as hardened gamblers are working the shadowy alleyways of the Internet to turn inspiration and zeal into profit. And cashing out on Heroes of the Storms is not all too difficult.

What strikes us is that even though HotS may have a relatively small players base, compared to other titles in its market, it is still broadly supported by Blizzard. Not only that, but all the events that are currently taking place offer hefty prizes which, if anything, proves that eSports is on the rise and companies are vying to find out working solutions and introduce eSports on a larger scale.

Chapeaux to Blizzard who have decided to reward players from top-performing teams in their respective regions with an appearance fee. A nod to the fact that salaries professional gamers are a new breed of, well, professionals and that perhaps they should be acknowledged and supported.

Oh, ancient battle grounds suspended across the galaxy, welcome the mortals who are about to die. Only figuratively speaking, for the best teams and their players are healthy and eager to test their mettle in a simulated carnage! It is hard to gauge how good a team is. Do we tell this by their overall number of wins this season? Is it their personalities, their difficult-to-best teamwork?

What exactly makes HotS teams, or rather some of those, better than other teams? Statistics be praised and thank you very much GosuGamers. The behemoth of online gaming has come up with nifty account of every team’s performance. A quick gander reveals that Fnatic, a Europe-based gaming powerhouse, has had it easy. 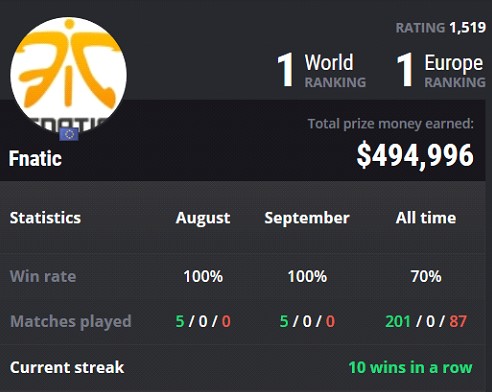 The latest data available at GosuGamers about HotS professional teams.

A rather heady success one should think. GosuGamers’ statistics are particularly handy when trying to break the game down to pure numbers. Still, other factors as the players’ current condition could be taken into consideration, and most of the top players beam their performances on streaming services such as Twitch.tv.

Overall, South Korean teams seem to be hot on the trails of Fnatic, with Team Dignitas proudly ensconced in the fourth place. 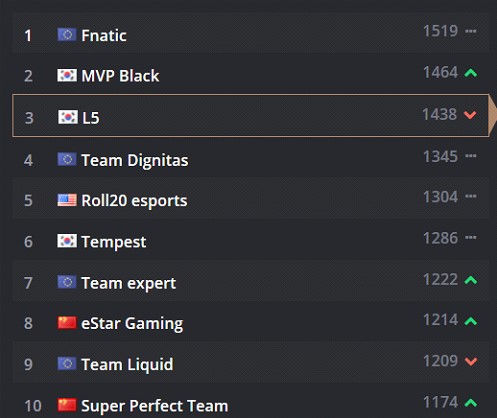 Heroes of the Storm betting is definitely not coming to an end any time soon. The above statistics are just general bearings for the lost gambler who is nevertheless eager to start forking out on competitive eSports.

How should the laic get into HotS betting? What we hold to be true is that anyone gambling should have some familiarity with the game that would allow them to navigate the numbers at bookies easily. Still, some gamblers are good at crunching numbers and producing a better overall results.

However, it is our conviction that MOBA hold too many uncertainties to account for, oftentimes the underdogs are the out-of-the-blue winners who appear a major pain in the backside to overtrusting gamblers.

Another idiosyncrasy to take into consideration when betting is that of the so-called cheesy strategies. What is that funny smell you would ask ourselves? It is the smell of surprise, the universe’s most underestimated element. Such occurrences are unpredictable and upset the balance of the skies easily, sending teams plummeting into tailspin.

This is the en…dearingly fresh start of HotS betting

Statistics, tournaments, affluent patrons, and flocks of devoted fans. Heroes of the Storms is slated to grow at a post-Big-Bang pace. This new eSports has made a splash so big, that far out at the shores, investors, gamers, and spectators are diligently moving out of the way of the oncoming tsunami, roaring with satisfaction, as the inexorable waves of HotS change the landscape of electronic sports forever.