How A Game Smote the Bookies: Smite eSports Betting

From the smoldering ruins of Multiplayer Online Battle Arenas (MOBAs) past and present emerges another title that has taken the world of electronic sports by storm. Enter Smite, the latest MOBA conceived in 2014 by the creative minds at Hi-Rez Studio.

The game has successfully introduced generous tournaments and events, emphasizing on the competitive nature of the virtual carnage that unfolds in front of the unmeaning faces of a new breed of professionals, gamers. Smite creators unsparingly invested in their title, setting it apart from humdrum brethren. The Smite World Championship 2015 vowed $2.4 million in prize money to various teams and the message this sent out was loud and clear – electronic sports are on the rise whether reasonable people would even concede to call them that at all. The bounteous yields of the Site World Championship cleared the way for Smite betting. 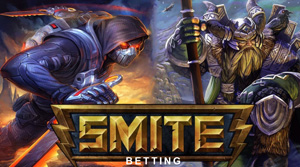 So in a word, the game offers quite a bit in the way of prize money, and where there is money there is betting. Throughout this article we will examine:

Let’s reel back. Smite creators did one exceptionally well – they banked on the underpinning trends in the electronic sports industry. Smite defied what MOBA titles should like by incorporating first person elements, beckoning out to a younger generation. Secondly, Hi-Rez made their game skill-intense and with a minimal learning curve, while allowing for a lot of wriggle room in a player’s personal development.

Smite has been expanding in every direction, with the game introducing electronic sports to Xbox and setting up the Smite World Championship for the console in 2017. With this expansion, some betting has (tried) teemed.

Betting On the Rise for Smite eSports

Smite has been quick to embrace innovation, but somewhere along the battered road of affirming itself as a competitive title and promoting itself as a new medium for would-be bettors, the game may have faltered in convincing traditional sportsbooks that it is well worth listing on their websites. Even though some bookies still offer occasional one-off bets, it is still difficult to pinpoint the locales where Smite betting takes place in earnest.

The rather private nature of the betting Smite community has spawned a breed of punters who would not fail to seize an opportunity as soon as it arrives. Events such as the Smite World Championship for PC and Xbox certainly whet some appetites. The argument goes that because Smite generates slightly lesser interest in placing wages on the outcome of matches, a cabal of astute risk-takers has secretly emerged to claim the benefits.

Still, there is little in the way of evidence to dissuade bettors to drop their hopes of betting on the title altogether and interest, while tepid, remains present. Relating the events to that of another MOBA game, Smite still has a long way to go and Hi-Rez continuous support has been a point in its favor. After all, eSports as a whole are driven by investments and most commonly, developer companies are forking out to promote their product. And all things considered, Hi-Rez have seen fit to reinvest proceedings into the various iterations of the game and its concomitant tournaments.

However gloom naysayers may cast the future, Smite has its own pillars, to name:

It is well worth remembering that League of Legends started off on the wrong foot. In fact a faux pas would be an understatement. Plagued by overloaded servers, which often tipped their hats and went off on holiday, a much-delayed replay feature and generally laggard response by Riot in addressing those issues, LoL disillusioned many a young enthusiast who had vowed their allegiance to the new MOBA.

The purpose of this simile is not self-serving. Smite and League of Legends both had their problems. But they are both (or were) novel products which promised much in the way of unrealized potential. Hefty cash pools still support the claim for a vibrant Smite betting kicking, and on occasion, screaming. Who knows what the future may hold?

There is still more crafty little ways bettors can improve their odds, and all of those boil down to knowing the game a little better. The replay feature, to a competitive player, is a chance to obtain insight into players’ styles by observing them rather than relying on hearsay. Having some understanding of game mechanics and knowing how to read statistics may bestow additional advantage to the wary observer. Smite betting as a whole will ultimately rely on several factors:

There is one more style of betting still. Fantasy betting.

As we have written across most of our pieces discussing Smite betting and betting on esports as a whole, we have mentioned Vulcun. The online bookie which used to offer fantasy-betting options to punters. However, Vulcun had to defunct its fantasy league before Smite betting saw the light of day.

Fantasy betting, if it exists somewhere for Smite, consists of picking a roster of teams and cobbling together a made-up, fantasy team. The players individual performances will add up and account for the team overall showing.

Fantasy betting on Smite would be just one more thing the future may have in store for bettors and players. Whatever the outcome, the game has generated considerable interest in all its aspects. Additional incentives are require, but not all is lost. Let us have a further look at bookies and Smite betting before heading out into tournaments.

Let us toy fitfully then with the idea of betting on Smite. We have outlined the current, rather barren, landscape for the game betting. It is anyone’s guess of the game will pick off to the point where gambling would be a viable, fully-fledged option. Certainly, a snag has been the rather cold legal context in which eSports gambling has tried to thrive, with the exceptions being places outside the United States.

Whatever local betting laws, placing wagers on electronic sports will stay en vogue as long as automakers and companies of the stature of Samsung, Intel and Coca-Cola continue to copiously lavish on tournaments and sponsor their own teams, it is highly unlikely that a turn of fortunes would occur.

So here we are, at the somewhat secluded temple of Smite betting. Tread carefully for there are many pitfalls. This said rather jocosely, let us see if we can pinpoint a handful of rules. When is betting on Smite eSports a good idea?

When would it be unadvisable to spend on betting of this sort:

In any event smiting the bookies would not prove itself too demanding a task. Bookies will most-likely be cottoning on this newly-emerged trend that is casting real money betting odds for Smite. And they would not be too dab a hand at that.

While there are no specific types of bets for Smite as eSports, the most prevalent is where a punter chooses the outcome of a tournament, match-up or an event.

Oh Smite, Where Thou Bet?

Well-established brands among sportsbooks will offer odds, particularly around the time when a large event is taking place. Consider the following:

2015 Smite World Championships
The first event that signaled future players, spectators, and implicitly bettors, that they might risk missing up on a great opportunity if they neglected the massive $2.4 million worth in cash prizes throughout 2015, courtesy of Smite’s developers.

2015 Fall competitions
Hi-Rez studios commitment to the game has been unflagging since the very beginning. Apart from hosting the World Champions, it funded the Smite Pro League Fall Split, Fall Finals, and fall Challenger Cup. The company threw in a total of $1 million for the World Championship by coughing up $300,000 for the Summer prizing.

Naturally, the prize pool has fluctuated throughout the years. In light of this the cash prize for the 2017 Smite World Championship was $675,000 and that for the Xbox division $150,000. This has been the first year, Hi-Rez lowered their prize pool for the PC version of the game, but this may be well-explained by the company’s bid to branch out on other platforms and build a multi-platform community which can easily transition between the two.

Looking back, Hi-Rez committed the same amount of money to the 2016 Smite World Championship.

With Hi-Rez all agog to win the loyalty of players of different stripes, platforms and age groups, the Smite Pro League has been going at full throttle bar the occasional slump.

All the official events sponsored by Hi-Rez are polished products. The commitment the developers have shown is frankly laudable and so is the hard currency they have put to back the claim they are well on their way of creating the next big eSport.

One might ask themselves, what other types of events are there short of the ones that Hi-Rez backed?

Online Lobbies
Let us Face It. Online private lobbies are a thing. Face It is a particularly tantalizing offer, all things considered. While there is not much betting on Smite going there, the website is arguably one of the better online venues where players may battle out virtual differences. The queues are easily accessible and Face It is well-organized. Remember how Gosugamers introduced their made up currencies to bet on various games? With some proper backing this may well happen to Face It and we can see some Smite betting kicking.

Semi-professional leagues and associated betting
The Electronic Sports League may not be as popular as the Major League Gaming. But that has hardly been its intent. The ESL is accessible to all and sundry. The have-nots need not clamor for the privilege to compete in its ladders. Despite this ironic remark, ESL is a truly an amazing place to get a foothold in Smite eSports.

Vibrant and intractable, the league offers novices a chance to hone their skill and become hard cookies in the rough universe of Smite.

Surely, the league’s downside is that it may not have a betting option. But as previously suggested, to get into the stride of Smite betting, you need to familiarize yourself with the game and make sure you know the features that are inherent to it. So start small, dream big.

eSports Smite and Betting on the Future

If one puts their money on electronic sports, one will not be remiss. Esports are no longer a boom-and-bust-business and with growing viewership, the exciting opportunity of pushing online betting further is tantalizing. Smite is a sapling of an electronic sport which may yet grow big and receive the support of the larger public and bookies. However, its vital signs may on occasion be frightfully weak. Still, there is hope as Hi-Rez’s commitment to revitalizing their game has not flagged not one iota. And with generous and sustained efforts and pecuniary incentives, the game will continue to tempt everyone, from the sworn professional to the aspiring dilettante.

The path ahead may be perilous, but it has to be walked nonetheless.