There was a time when Lee “Flash” Young Ho, a professional StarCraft player, was asked what he did when he was not focusing on his training routine in a bid to maintain his dominance in the futuristic real-time strategy game. “I play other races,” was what Mr. Ho said. 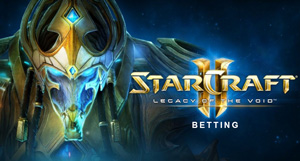 StarCraft and its proud successor, StracCraft 2, have long been cable TV in South Korea. Good players often earn decent salaries and accumulate additional riches through sponsorships bagging prize money from competitions, big and small. Mr. Ho and his ilk bring in large profits, mesmerizing the minds of fans and presenting sponsors with tantalizing promises. More than anything, the coterie of professional StarCraft players are busy, wobbling the balance of the skies.

With its sizeable viewership, StarCraft has been on the rise as an electronic sport, and one thing electronic sports do not do is shy away from online gambling. StarCraft 2, long being an established title, has naturally attracted droves of enthusiasts, aspiring professional gamers and, undoubtedly, people willing to cough up for video games in the hopes of multiplying their investment.

Surely, electronic sports can be a boom-and-bust-business and StarCraft’s wane in popularity may have given scaremongers reason for smugness. Still, the majority of sportsbooks have banked on the buzz around StarCraft and StarCraft 2 and introduced StarCraft 2 betting to their websites.

A number of websites today offer real money betting odds for the Blizzard’s groundbreaking competitive game. And while bookies struggle to thrash out SC 2 odds, identifying the different types of bets is an implicit part of placing one’s first bet.

For the most part, StarCraft 2 bets are placed on a festive event of a tournament or some smaller altercations somewhere in the imagined depths of the starry universe. Whatever the occasion, bets mostly focus on making predictions about who will best their opponents and cover the light years that yawn ahead from the early stages of the competition to the quarter and semi-finals.

When it comes to particular events, bets will be accepted on the nationality of the winning team. A more specific type of wagering is when punters are allowed to bet while ruling out the favourite and enabling chance-takers to make predictions about how the tournament would pan out in the absence of said team.

Meanwhile, propositions bets may be out there, but I could not find any upon my research. A proposition bet is making a suggestion about the outcome of the game as a whole, but also making match-specific suggestions, as in how long a game would last, or if a particular player will end up with his troops capped out. It is easy to come up with one’s own suggestions.

As is the case with electronic sports and gambling in general, taking the time to familiarize oneself with the ins and outs of the StarCraft 2 competitive scene is well worth taking into account. Naturally, being more actively involved with the game or just spending some time on it as a past-time, as a viewer or otherwise, might sway the odds in one’s favor.

While being aware of StarCraft 2 mechanics will not make a great bettor, it still seems like a rather natural course of events for anyone who wants to get into this as a slightly overzealous gambler. SC2 betting will require that punters are to terms with the likes of Mr. Ho. Even though the top names constitute a closed-off society of social pariahs and are accountable for wreaking havoc across the galaxy, there are the occasional shooting stars who come into existence the same way a new sun is born.

Overall on the top level, StarCraft 2 matches are neck-and-neck brushes making betting on the game a fine art paired with no small amounts of fortune and the occasional exasperation which shows in the game of a professional player. Some players are rumored to have frighteningly short fuses, but as irony would have it, the unbridled anger only blows in their faces.

This last remark points to another essential part of gambling. As in real sports, accounting for character traits, and flaws, might help predict how a player fares in different circumstances. Interestingly enough, some players seem to have innate ability to cope with certain situations and have their own list of opponents that traditional bookies would not even take into consideration when crunching betting odds.

However incredulous, the self-confessed fears of players do exist and it is at this point that fans might have a slight edge when placing a SC2 bet. Think of some of the unlikely scenarios that as INnoVation, a currently teamless South Korean Zerg player, who is renowned for his tendency to flounder finals as well as overcome great odds. Speaking of the rather less glorious side of the competitive scene a former competitor by the name of Idra whose ignominious fall of grace was a telltale example of how excessive hatred may not only discredit you as a human being, but also put a damper on all one’s hopes of roughing it as a competitive gamer.

Least of all, SC2 bettors are advised to follow major league streams in a bid to get wind of recent developments. Approaching the game from a purely entertaining point of view may help contribute spot trends in how someone handles a given race. Without too much digging to do and data to parse, bettors may develop a gut feeling for right and wrong, no-go and all on black.

The doldrums StarCraft 2 may be going through are easily discernable. In fact, only a handful of bookies offer SC2 bets.

Taking a closer look at bookies, punters need to be aware of several things:

Clouds have gathered on the house of Activision Blizzard and the echoes of yore about a glorious future for electronic sports is faced with the realities of a present in which some genres of competitive gaming have caved in to their more readily adopted brethren. The competitive scene for real-time strategies is in a state of flux. Fortune reported on Blizzard’s attempt to lift the game off the ground and to the summits of electronic sports again.

There is, however, light at the end of the tunnel and many would half-heartedly argue that it is not a miffed Archon. Or, at least, they would have argued so if all that was left of them was not a pair of smoking shoes.

All joking aside, some sportsbooks will offer newcomers bonuses, incentivizing and cultivating a flock of devotees who are one step closer to navigating the flat world of gambling. Such bonuses will vary from one bookie to another.

Adding to the previous consideration of bets, we may sum up the types of SC2 betting as such:

What StarCraft my lack in a booming betting scene yet, the game quickly makes up for with its well-seasoned community that readily offers council to those who seek it. Established forum boards and websites are a sweet spot where strategies are forged, stratagems hatched and bitter spats not a rare occurrence. Teamliquid, for example has kept a well-organized site nurturing the entirety of starcraftdom.

And while StarCraft 2 may seem to pale in comparison with other electronic sports, it is through the community’s efforts that the game has matured and come to a point where history would not have been the same without it.

Prior to adding more factoids about the history of eSports, let us take a closer look at some of the more significant tournaments throughout 2017 and their respective cash prize pools.

2017 StarCraft II World Championship Series (WSC)
This is the event that may spark the most interest in the competitive scene around StarCraft 2 and naturally the event that generates the most opportunities for gambling. Hosted together with Blizzard Entertainment the tournaments is series of events that culminates in a final clash where the crème de la crème of the StarCraft 2 pool of competitive wonks show what they are capable of. The pinnacle of the long-drawn series is known as the Global Finals.

Breaking down the system further, it is useful knowing that the WSC consists of two separate systems, namely the WSC Korea and WSC Circuit.

Most of the WSC qualifiers, numerous as they are offer prize pools of $10,000. They are held at various locales around the globe, as the tournament strives to be as widely represented as affordable.

World Electronic Sports Games 2017 – European Qualifier
The event is slated for October 26 2017 and it promises an impressive prize pool of $40,000. As appetites are whet, players and punters are equally excited to follow up on a few good bets and a no negligible chance to make a mint.

The bottom-up structure of this events offers for a greater involvement on the part of community. Consider the participation prizes with the OSC distributing $250,000 in 2016.

Additional cash rewards known as bounties are forwarded to players for around AU100. These small monetary incentives are distributed only once per a resident of the eligible regions and they apply for BO3 series only.

Through its sterling efforts to hold StarCraft competitive gaming in high esteem, the OSC introduced its OSC League in April. OSC made a statement saying that the new $5,000 gig will run in parallel with its $200,000 + Player Championship.

The OSC League will defy what regular leagues impose in restrictions, often detracting from the diversity of the game and limiting the room for individualism players may demonstrate. While the OSC League continue to adopt the latest competitively-stamped maps, it will also strive to maintain a healthy pool of arenas to choose from. The OSC League will also try to clamp down on the highly-elitist BO1 format most leagues support and players who participate on their own throughout the league will also be contributing points for their organization in the Team Rankings.

Community-driven, StarCraft 2 rigors has not dethroned the game as the world’s premier real-time strategy. As it perseveres, more opportunities for online betting on StarCraft will emerge. Not to mention that eSports are now set to bloom, as we briefly reported in another article on the International Olympic Committee to adopt eSports as an official event.

Is this the time when gambling may be legalized across all realms of sports and well between the stars?

StarCraft 2 Betting Over and Out

At the onset of StarCraft 2 there was the slow and reluctant transition towards StarCraft’s glitzier sibling. Embraced by the Major League Gaming (MLG), the game has prospered. Sundance diGiovanni, MLG’s founder and chief executive, has his own professed love for video games. He once said that even though the idea about making money while playing video games may appear outlandish to some, a change of fortunes would come, and very soon after it had.

Naturally, StarCraft 2 will command its place among the stars of electronic sports representatives and gambling, as well as idealism, will be intricate features of its whole.