World of Warcraft (WoW) Betting: What a nervous Nelly

The year is 2005 and thousands of people are champing at the bit to traverse the Dark Portal as the stony monolith produces a ghostly greenish luminescence, enthralling the throngs of players milling about. Behold, for the pathway to the Great Beyond has come to life. Allowing one’s character be engulfed by the ghostly translucent matter zaps us to 2017, when World of Warcraft’s (WoW) is still very much alive.

When it was introduced, the game constituted a social phenomenon with consequences so far-reaching that the sheer immensity of what had just came into existence left gamers dumbfounded. Lauded by keyboard-pounding teenagers and grown-ups alike, the game has since lost some of its allure, with players leaving in droves. 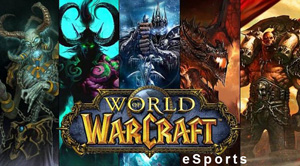 In the following review, we will try to outline and put flesh on another, less known aspect of the game, that of WoW betting, while following the game’s burgeoning popularity and subsequent decline, and accounting for what part WoW had to play in the development of electronic sports or eSports today. Let us have a quick gander at what is what:

WoW as eSports, WoW as an instigator of under-the-radar betting

Betting on video games is altogether an exciting, let alone new, notion. The idea has been floated since 2005 when in-game traded goodies had been estimated to have a cumulative value of $100m a year, i.e. the amount of money players actually paid in greenbacks to acquire in-game goods.

To say that betting on eSports is a fresh idea, however, would be well in the wrong. Not only are eSports an industry that has had its teeth cut, but are electronic sports now shining their claws, and even fangs, at the juicy prospect of turning a profit by inciting people to bet on make-believe stuff.

In essence, WoW betting and the websites that offer such services are pariahs in their own right. The cornerstones of WoW betting are shaky and they can be described as such:

The different nature of WoW betting would require us to gauge the upside and drawbacks of what betting there is going on right now in the community and chose an approach that ponders the probable rather than making predictions about a future which may or may not be.

Any observant reader would have noticed that we spoke about a hush-hush wagering in our title. Correct, we talk about those surreptitious WoW bets placed in complete secrecy and at a great personal risk for the character of the perpetrator.

Batten down a few hatches, then, and let’s introduce the bets. Do not worry too much about leaving a hatch gaping, it is hardly a bumpy ride:

Player versus Player (PvP) – PvP bets are a novelty in WoW. Looking back, the game’s PvP aspect was kept at bay, much to the chagrin of individuals of a rather more bellicose turn of mind. However, the good people at Blizzard only began to probe more seriously the concept of PvP in following expansions with the PvP clamor reached a crescendo around the time the Burning Crusade was introduced, and has been in a state of ebbing and flowing ever since.

When betting on Player versus Player matches or Arena Tournaments, as they are known, punters decide which team would win and place their bet accordingly. The majority of such tournaments are in 3 versus 3 format.

In other words, WoW PvP betting concludes all the wagering punters can carry out with WoW as an eSports. Paring the layers of complexity from the game, we see it is still a very much demanding game in terms of skills and knowledge. However, it falls under the category of miscellaneous betting items. Still, a recent wind of hope has paved the way for more betting through PvE.

Player versus Environment (PvE) – PvE bets are even newer concept still, introduced only recently by a pair of sportsbooks. To understand what WoW PvE betting is, you need to be aware of the overwhelming complexity of the game and its many facets. Esports betting on WoW is possible through the PvP mode, which pits players to square it out in virtual arenas.

Meanwhile, PvE focuses on cooperation and fighting fiery and unimaginable horrors while relying heavily on your partners. This admittedly demanding aspect of the game has been appreciated by a duo of bookies who have thought it worth it to introduce PvE as a way of betting. In June 2017, Bet365 announced it is introducing this new type of WoW betting.

When PvE bets went live, Bet365 was offering odds on which guild would be the first to defeat mythic Kil’Jaeden, a relic from the times of yore, when the Dark Portal went up in green flames and set on a dramatic change in the entire World, of Warcraft. Kil’Jaeden dwells in the Tomb of Sargeras, which was ruled by nine powerful enemies, among whom was the most wanted demon.

The fact that some of the larger and more respected sportsbooks out there are making tentative efforts to introduce WoW PvE betting may bode ill for the vast majority of bookies out there. The possibility exists that they would follow suite.

However, WoW betting on PvE is facing a thorny issue. Such bets would mostly be available whenever a new content is available, which may limit the frequency at which they are placed and lead to a dip in their popularity.

At the same time, more people have been clamoring for Blizzard-backed in-game gambling on Arenas. The echoes of a detailed post from 2011 can be found here. There are a few risks to take into consideration, though, and Blizzard may as well have done so in postponing to embrace gambling for their MMORPG title:

*The types of bookmakers we mean are sorts of town criers who try to catch the eye of the errant bystander and tempt them into wagering money on the roll of a dice.

But apart from that, WoW still has the potential to become a title gambling on is well worth the effort. Conversely, the somewhat diminishing popularity of the game could well put a damper on those hopes.

All the naysayers be confounded, WoW PvE bets have been introduced only a couple of months back and not all hope is lost. Bitcoin, the world’s sexiest cryptocurrency is shaping up as a bit of an outlaw in China. However, no clear data on how much bitcoins go in the way of WoW betting is available. Some bookies have been known to offer odds, accepting bitcoins. But the segment is nascent and therefore slightly obscure even in the marginal realms of eSports betting.

The main proponent of any video game as an electronic sports is naturally the company which has created it. We have seen this with League of Legends (LoL), Defense of the Ancients (DOTA) 2, and Overwatch. Let us have a look at existing competitions: 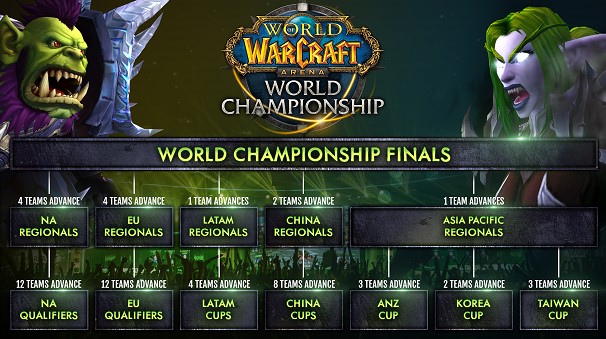 Blizzard promised a set of changes designed to boost WoW competitiveness and to ‘level up’ eSports as a whole. Indeed, the company did a good job of making the event more open to enthusiasts who did not need to meet a number of tedious criteria, such as sporting a cumbersome arena rating in order to qualify.

Making the event accessible to the hoi polloi of gamerhood is not in itself a bad bet. However, in order for numbers to attain significant levels, Blizzard will have, to use their own words, take WoW ‘to the next level’. With a relatively small prize pool of $6,000 (for this year’s event) and the event taking place around Blizzcon, WoW betting is handicapped. In order for full to take in earnest, larger events will have to come rushing into our rather mundane and less cartoony plain of existence.

Electronic Sports League
Electronic Sports League (ESL) is a name that rings familiar to anyone who has even flirted with eSports WoW and electronic sports as a whole. ESL is at least as old as the World Cyber Games are. ESL could have potentially been a good place for WoW betting and with the League’s focus on electronic sports, it could have prompted more action into WoW. As bad news would have it, the WoW section of the website has been closed since the beginning of 2016. If eSports WoW begins to pick up steam again, ESL will surely update their front page.

Strategy about WoW betting and the future

The ‘meta’ is presumably the optimal conditions that the game could be currently played at, meaning certain classes would have different advantage introduced from one version of the game to the other. Keeping up with the upsurge of new information and collating the data to make an informed decision is difficult. Perhaps, more than anywhere else, placing an informed bet in WoW would require punters to quite diligently follow everything from patch notes to even playing a bit for themselves so that they may be aware of the pitfalls an unwary bettor can easily fall prey to.

Luckily, Twitch.tv has made it easy for players and spectators to eavesdrop and downright bloody eyeball each other if they should so desire. In fact, World of Warcraft has made one very solid contribution to electronic sports. The game’s popularity encouraged people to show it to the world through streaming services such as Twitch, which seem to have got the lion’s share of viewership. The trend of spectating players has quickly picked off and a lot of rival companies and games have banked on in steadily, adapting their games with replay functions and making sure live streams are available around the clock so that insatiable spectator may be a little less puckish at any given time of the day.

WoW betting through the Dark Portal and back

In terms of popularity, WoW betting and WoW as an eSports are easily dwarfed by a number of titles today that sportsbooks have on offer. Blizzard is most certainly not giving up on competitive gaming. Quite on the contrary, the company is making a determined push in that direction through another title, Heroes of the Storm, which is one of the most competitive titles drawing from the entire Blizzard lore.

However, one question remains unanswered and speculations swirl – will bookies out there follow cues from Bet365 and Pinnacle and bring World of Warcraft to their list f games? It remains to be seen, because even though bettors have crossed the filmy mist of the Dark Portal of uncertainty, they have not yet emerged in the Great Beyond where the answer would supposedly be answered.